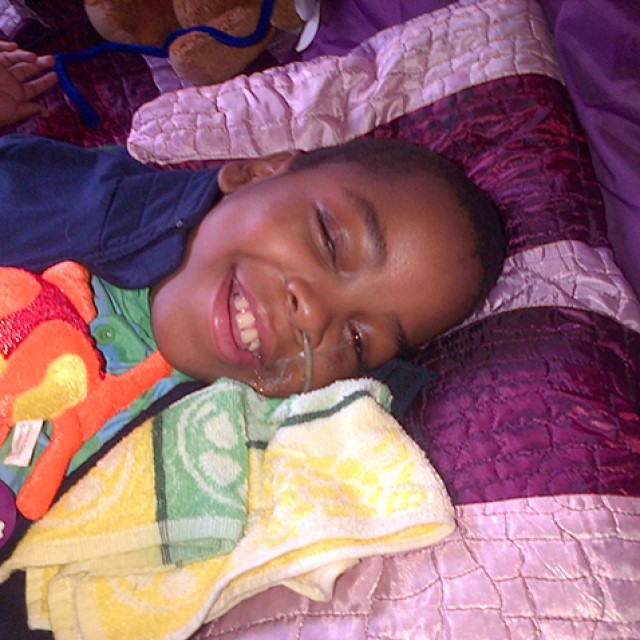 Clement’s birth was traumatic and caused a lack of oxygen to his brain leading to severe cerebral palsy. In his case, it meant he would never learn to walk or talk and needs constant care from his adoring mum.

We met Clement when he was 8 years old. He was referred to our palliative care team because he had been in hospital for 3 months with recurrent chest infections. The doctors were at their wits end; every time his condition improved a bit, he would acquire another infection and be set right back. None of us thought he would ever leave hospital.

The day our team saw him, he was very underweight and distressed. His breathing was too fast and his whole body tense with pain. He was on oxygen and hooked up to yet another course of intravenous antibiotics. He appeared anxious and miserable.

We met with both his parents and explained that we didn’t think we could make him better. His overall condition was so poor that we should shift our focus and hope of getting home, to making him comfortable. They very sadly accepted this but agreed they couldn’t let him suffer.

That same day we started him on the strong painkiller, morphine which also helps to ease the sensation of shortness of breath. The change was miraculous. Very quickly, he relaxed and started to breath more deeply.  We continued the antibiotics and within a few days, he started to improve and was discharged home in time for Christmas.

One of the issues facing some children with severe cerebral palsy is swallowing safely; because their swallowing is uncoordinated they drool or sometimes even choke. This choking was leading to Clement’s chest problems, so now he is fed through a tube in his nose. We have also arranged for a home suction machine so that his mom can relieve that excess saliva. By doing these two things, his parents have managed to keep him mostly well and happy at home over the last 10 years!